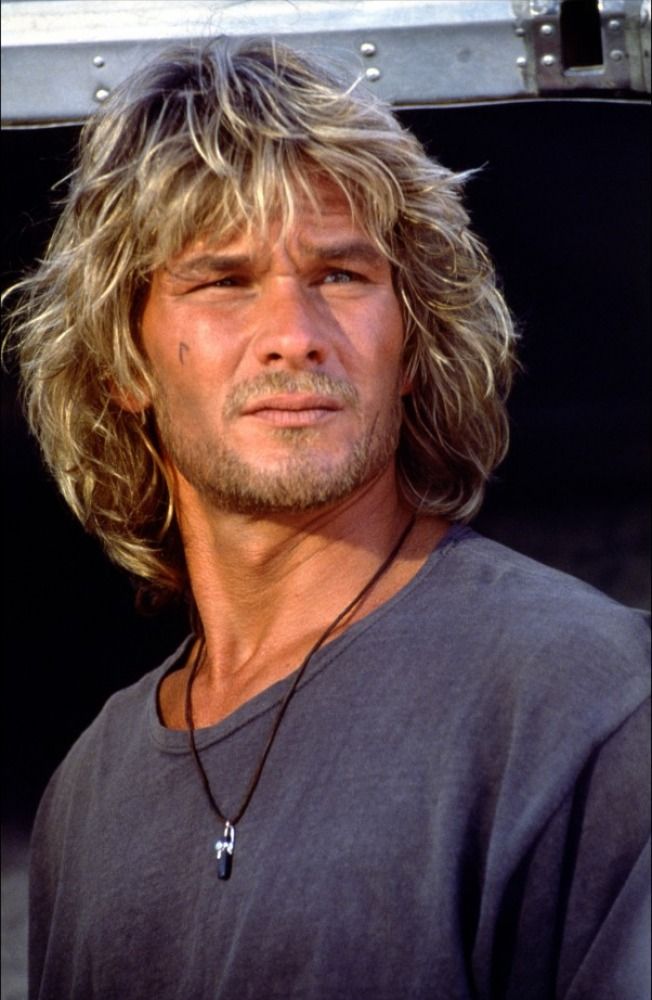 20. The FBI criticised the film 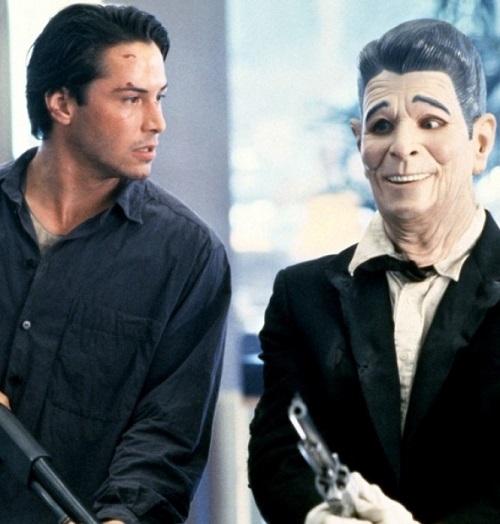 Reeves met with a real FBI agent for the purpose of the film to give the actor some realistic insight into the job so that he would be able to get into his role and portray it more realistically.

However, the consultant FBI Special Agent William J. Rehder was less than impressed with the final film of Point Break, claiming that none of the advice he gave “came within a million miles of the finished film.”

Rehder was a specialist in Bank Robbery investigations in LA. He further criticised the film calling it “one of the dumbest bank robbery movies ever made.” Safe to say he wasn’t a fan.

19. Point Break was actually the second movie that Swayze and Reeves made together 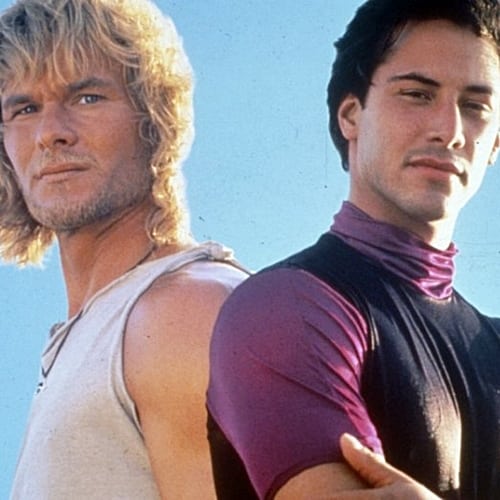 Point break gave both Swayze and Reeves joint billing and made sure that both actor’s names featured on screen at the same time during the opening credits so that the actors were acknowledged equally.

Both actors appeared together in the movie Youngblood which was released in 1986. Back then, Reeves only had a small supporting role in the movie, wheras Swayze was one of the big actors.

Patrick Swayze was immediately impressed with Keanu Reeves whilst they worked on their first film together. Swayze expressed that Reeves will definitely go somewhere, despite Reeves being new to the world of film at the time.

18. Only blondes were considered for the role of Tyler until Lori Petty 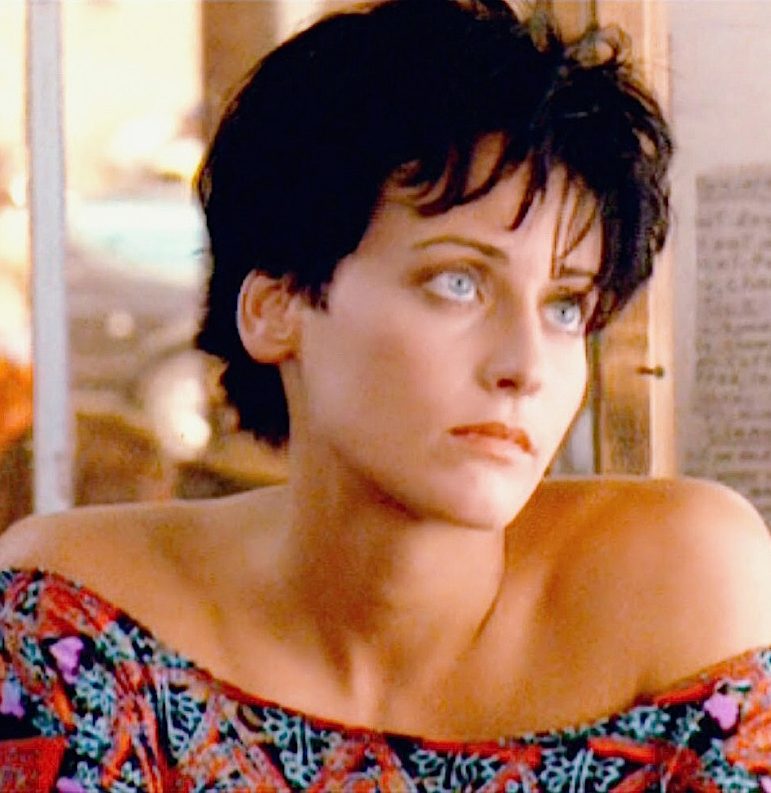 Originally the script features the description of a stereotypical surfer girl. However, Lori Petty did not fit this conventional, blonde image. There was much contention when it came to casting Lorri Petty, similar to the way Keanu Reeves’ image caused a stir when he did not meet the conventional macho image.

Therefore, as the film makers were only looking for actresses who fit this description – which Lori Petty, dark haired and tomboyish did not fit. Despite this she auditioned for the role of Tyler anyway.

But after auditioning multiple actresses Kathryn Bigelow stated her preference for Lori Petty to play the part of. It was then decided that the character of Tyler would be made to work around Lori Petty.

17. It was made almost 5 years before it was released 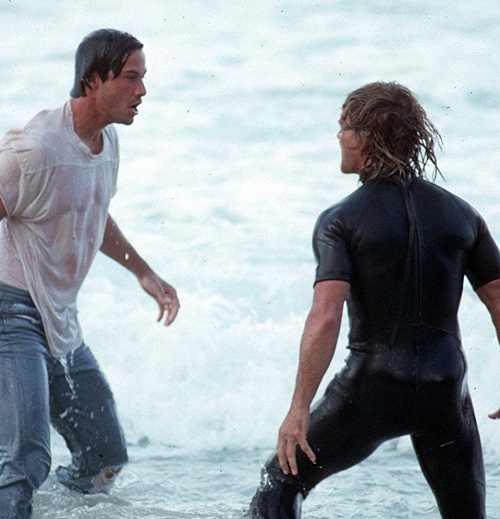 Point Blank made it to our screens in 1991. However, the original screenplay was actually written significantly before that, and almost went to production much sooner.

Ridley Scorr, the first director of Point Blank almost had the film up and running back in 1986. At the time, Johnny Depp, Charlie Sheen and Matthew Broderick were all being considered for the role of Johnny Utah.

However, Point Break went back to development when Scott Ridley took another directing role for the thriller movie Someone to Watch Over Me. 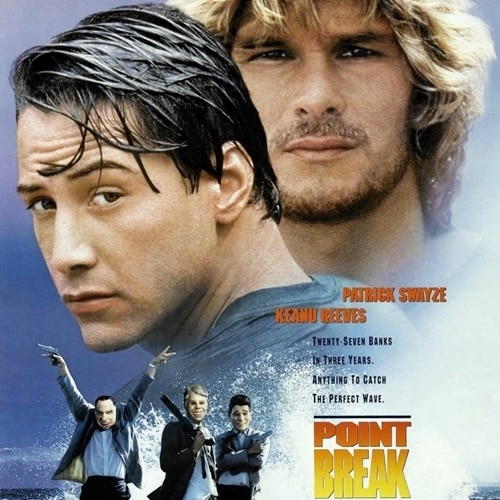 Liff is the solely credited screenwriter of the movie. However, in actual fact Cameron and Bigelow had massive imput into developing the script. They rewrote a lot of the script themselves, but remain uncredited.

Prior to Point Blank, Liff had produced just one of his scripts. Liff could not count on being a producer as his sole income at the time and he had been working as a waiter to make ends meet before being hired for Point Blank.

After the fame of Point Blank Liff went on to have many successes and could subsequently his part time waiter job. His screenwriting credits include the likes of Under Suspicion, Patriot Games and Varsity Blues.

15. Keanu Reeves was so impressive the film was nearly named after his character 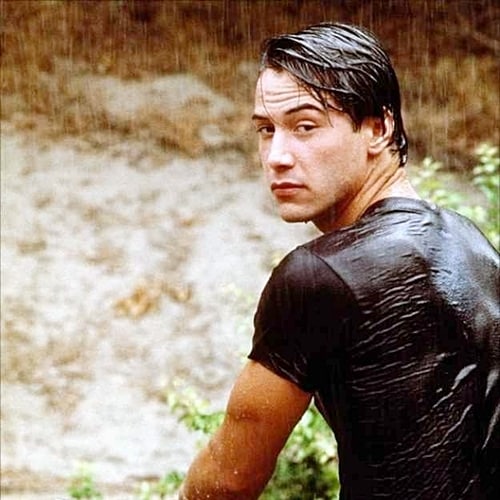 Point Break was the first action movie that Keanu Reeves had ever made. Director Kathryn Bigelow fought for him to play the role of Johnny Utah despite many of the Point Blank team disagreeing with her.

At this time he was still strongly associated with his role in Bill and Ted’s Excellent Adventure. There was a lot of doubt as to whether he would be able to play the part of Utah convincingly and play a tough, heterosexual bravado.

There was also pressure to cast a big and well known actor. However, Bigelow stuck to her guns and insisted upon her decision. Once he was cast the decision was so popular the film was nearly renamed Johnny Utah.

14. Then the film was almost called Riders on the Storm 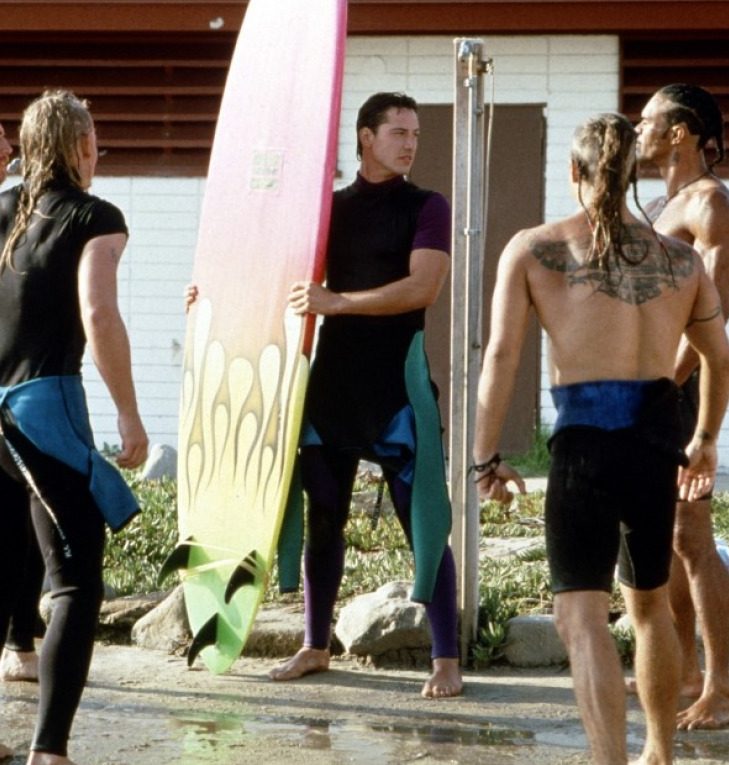 Despite being so impressed by Keanu Reeves, Johnny Utah was finally rejected as the name for the film because it gave no indication to what the movie was actually about.

Eventually, the producers settled upon the name Point Break, even despite their concerns that this title would not be associated with surfing to the average surf amateur.

13. This movie proved talking whilst skydiving is IMPOSSIBLE 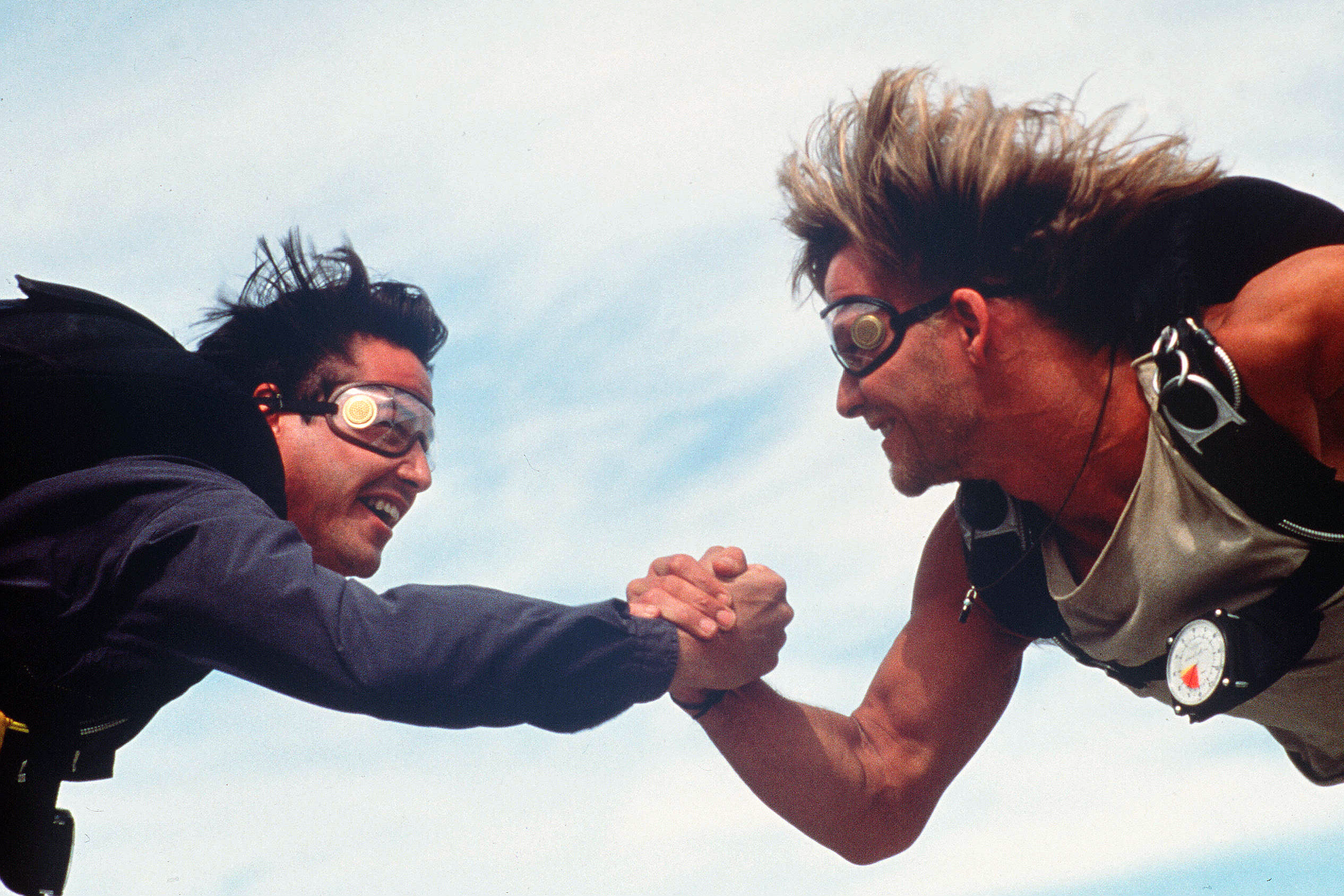 By this point both cast and crew have trained in surfing and skydiving, but this unfortunately didn’t mean that they managed to conquer the laws of physics. In the movie Bodhi and Utah have two prety much full-blown conversations whilst falling through the air.

The TV show MythBusters burst the bubble in 2007 when it proved it is not actually physically possible to hold a conversation whilst sky diving. Not only that, but it was impossible to free-fall for as long as they did in the movie.

So whilst Point Break might not be completely scientifically accurate it definitely made for a more dramatic scene.

12. Not ONE cast member could surf before the movie

The majority of the main characters in Point Break are surfers, which of course meant that the cast had to learn with a crash course in surfing.

So Keanu Reeves, Patrick Swayze and Lori Petty all learned how to surf with the world class professional surfer Dennis Jarvis in Hawaii, one of the best surfing locations in the world.

Jarvis had quoted that “Patrick said he’d been on a board a couple of times, Keanu definitely had not surfed before, and Lori had never been in the ocean in her life.”

Even with the world’s best surf instruction, only a few weeks of training proved challenging for the actors. Especially for Patrick Swayze, who insisted on performing his own stunts for the role of Bodhi.

The actor was insistent that all the stunts performed by his character would be his own. In his previous acting career Swayze had always performed his own stunt scenes including several fight scenes.

This definitely wasn’t all smooth sailing for Swayze, who cracked four ribs shooting the surfing scenes. However, his efforts paid off and no-one watching the film would ever question his surfing ability.

10. Swayze broke a record by doing 55 skydives for the movie 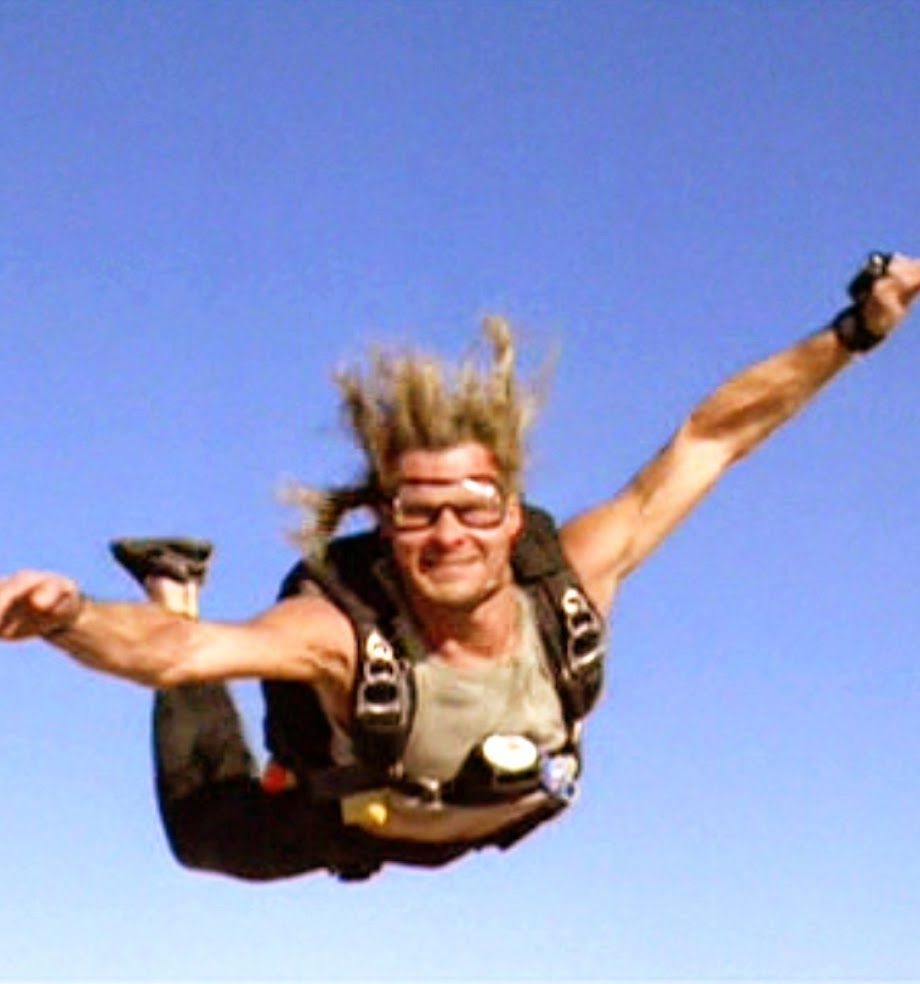 Like anyone who has seen Point Blank it is well known that the film is not just about surfing or robbing banks but it actually involves quite a bit of skydiving too.

As with the surfing scenes, Swayze insisted on doing all the sky dives himself – he performed over 50 sky dives just to get the right shot for the film, that is serious commitment.

According to Point Break’s aerial jump instructor Jim Wallace Swayze was a natural and took to it straight away (we never doubted him). 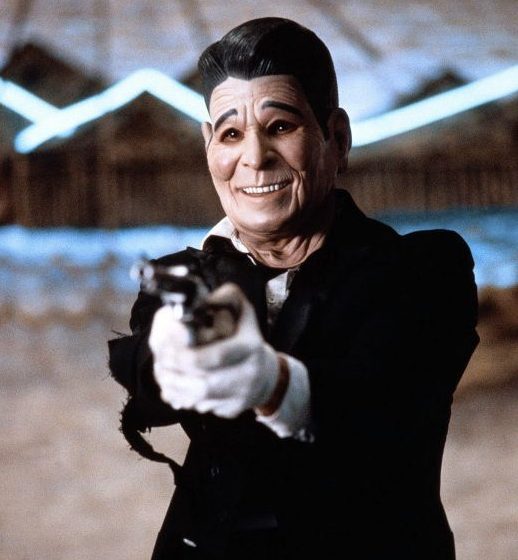 One of the most loved scenes of Point Blank takes place on the streets of Los Angeles. Johnny Utah chases down the the Ex-Presidents gang whilst robbing a bank.

While Johnny was chasing Bodhi in the film, in real life Reeves was not chasing Swayze. This part of the fim was actually cast with a body double as the actor had other commitments filming for Ghost.

It turns out Swayze was actually relieved to miss this scene after seeing it films. The actor, who suffers knee problems thought the scene may have been too gruelling to film. 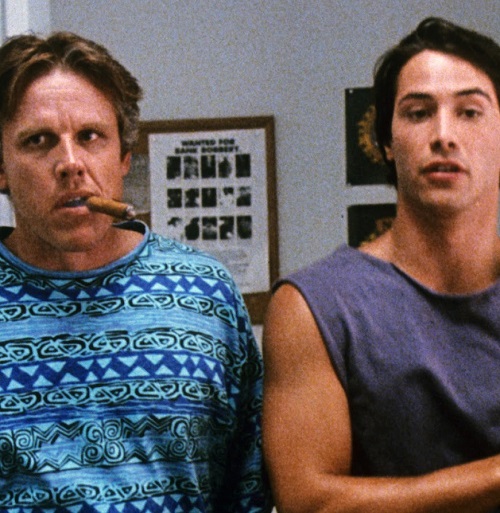 Co-star Gary Busey had previous experience in surfing films. The actor is notorious for his unique style and the way he is fairly vocal in his input.

The director Kathryn Bigelow was happy for Busey to do his thing and let him improvise his own lines for select parts of filming and let the actor have some of his moments shot ad-lib.

The script asked for Pappas to ask Johnny to go buy him a meatball sandwich. Busey’s own intepretationled to one of the most well known lines of the film “Utah – get me two!”

7. Reeves couldn’t throw the ball so does NOT feature in any football scenes 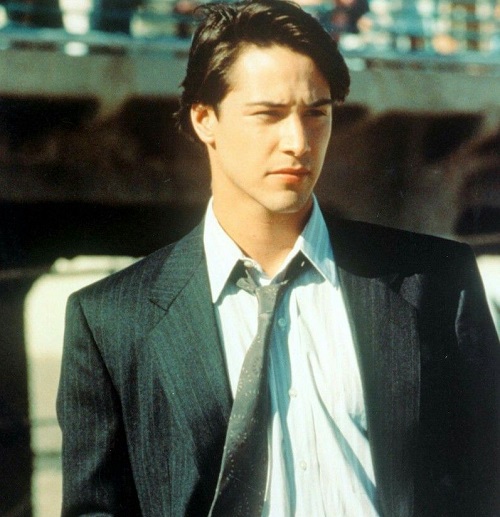 The role of Johnny Utah meant that Reeves not only had to conquer surfing but he also had to appear so good at American football that he could be a professional.

This was something Reeves had particular difficulty with whilst filming the movie. The actor recieved tips from Rick Neuheisel, American Football coach at UCLA.

Despite everyone’s best efforts, Reeves’ attempt at being an American football pro wasn’t convincing enough. The actor could not master throwing the football and in the end a double had to stand in to save the scene. 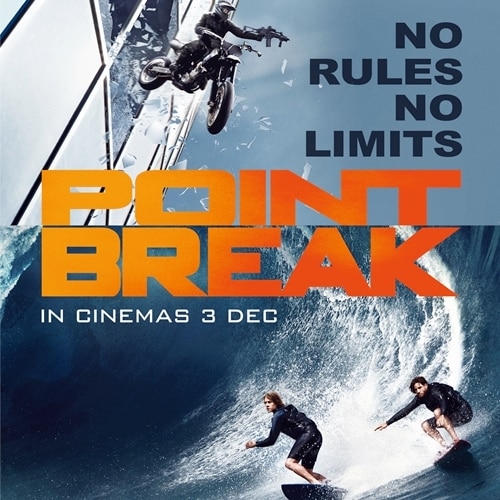 Given the popularity of the film it was hardly surprising when the film was remade. The remake was pretty much identical in plot and characters as the original.

However the movie was not well received at all and the overwhelming reaction from audiences and critics was mostly negative. The general consensus was that the original should not have been remade – why fix something that isn’t broken.

5. The final scene was shot six months after the rest of the movie was made 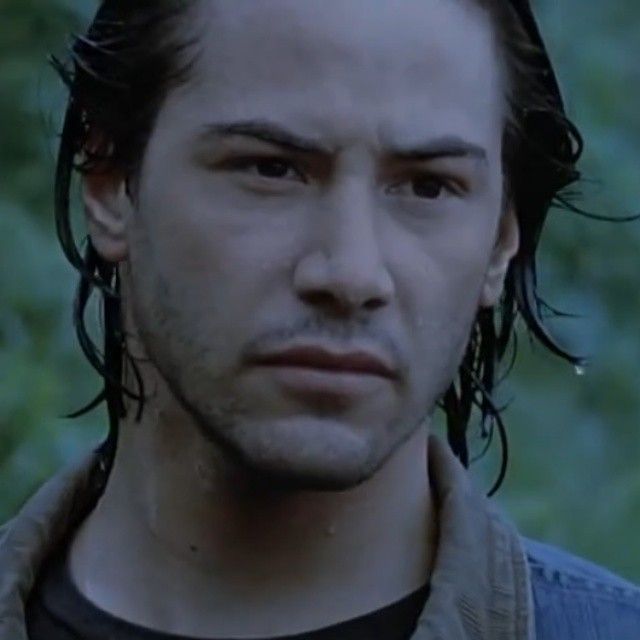 Fans of the film will know that the final scene of Point Break is set after the rest of the film takes place. It ends with Johnny Utah finally having tracked down Bodhi at Bell’s Beach in Australia.

Not only was the scene set after the rest of the film, it also took place significantly after. The cast came together six months later – which explains why Reeves hair has grown so much and why Swayze’s hair was much shorter than previously.

The actors had been filming for other productions during the break. The final scene is set in Australia but was actually filmed in Ecola State Park, Oregon.

4. There was a battle between husband and wife, Point Break vs Terminator 2 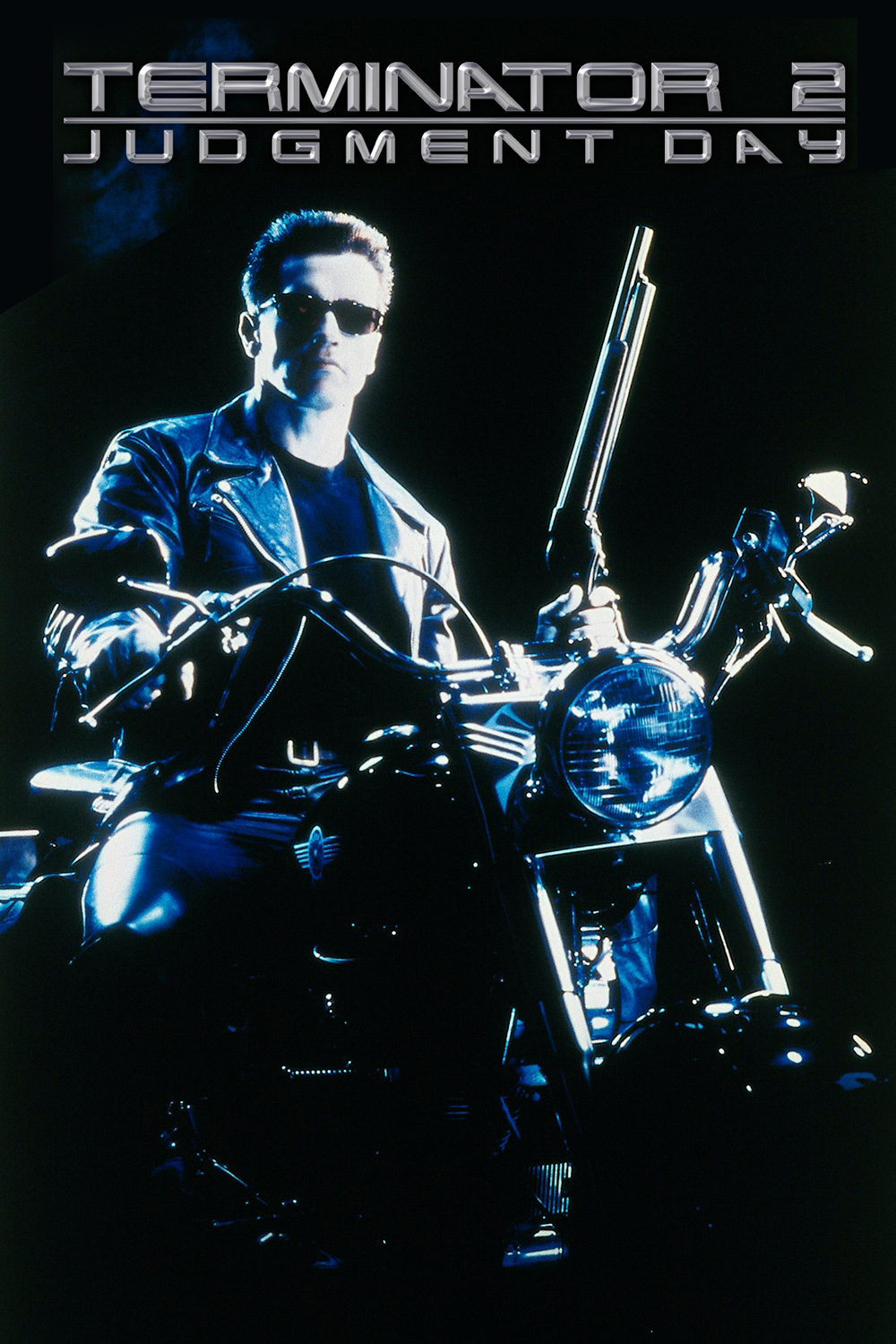 When Point Break hit the big screens in July 1991, it wasn’t the only one. High profile film Terminator 2: Judgment Day had been released the week previous.

The writer and director of Terminator 2 was James Cameron, executive producer of Point Blank and the husband to Kathryn Bigelow. For the first time ever a married couple were competing against each other at the Box Office.

3. It inspired a live theatre production 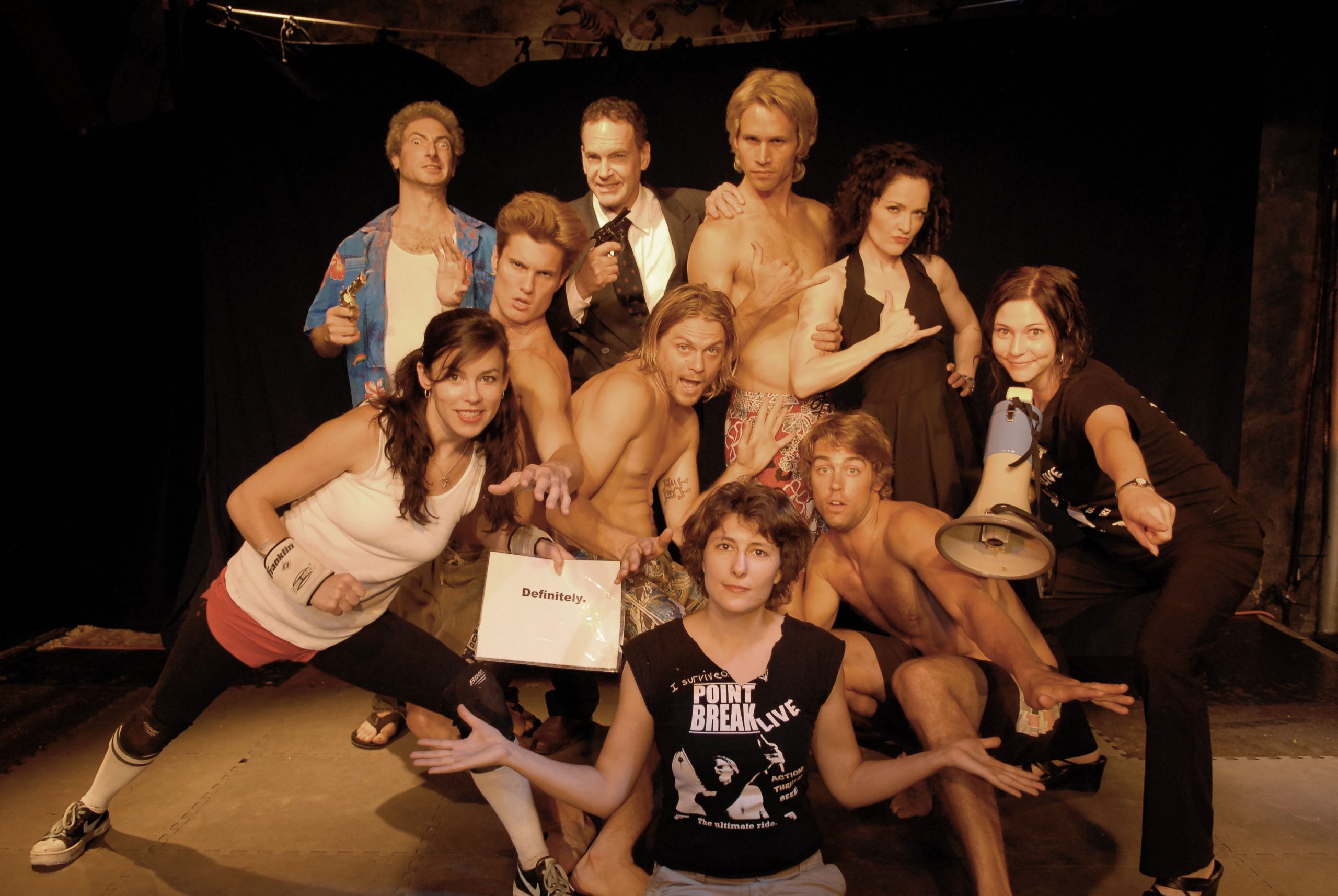 The film was so popular it inspired a comedy stage show called Point Break Live! It was referred to as ‘the first ever reality play’ as it mixes both scripted and adhoc acting.

Each performance included a member of the audience playing Johnny Utah – completely unrehearsed and unprepared. The successful Johnny would then read from cue cards throughout. 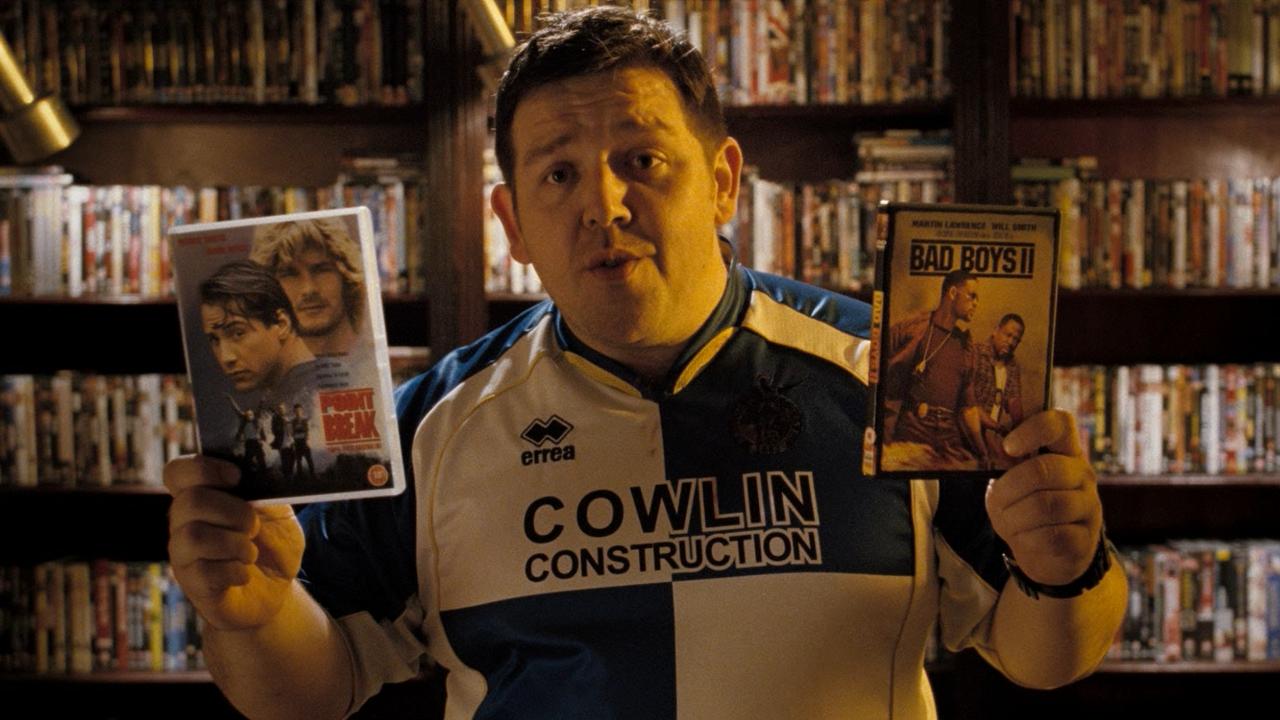 Point Break is referenced throughout Hot Fuzz, the action-comedy film from the same makers of the film, Shaun of the Dead. Hot Fuzz is a comedic take on a Hollywood cop thriller, set in a quiet English village.

Hot Fuzz’s character Nick Frost who plays Constable Danny Butterman, quotes Point Break throughout the film and actually recreates one of Point Blank’s most memorable moments in the movie.

It draws from the scene where Johnny Utah fires a gun in the air and screams rather than shoot his loved one. This is replicated by Danny in Hot Fuzz during a comical version of the scene.

1. Patrick Swayze was successful as he was spiritually linked to Bodhi

Bodhi, short for Bodhisattva is a term that originates from Buddhism. It refers to an enlightened being who helps others gain a state of enlightenment, which is kind of similar to Bodhi’s relationship with Johnny.

Swayze has openly explored a number of spiritual avenues in his lifetime, including Buddhism. This was one of the reasons he felt right for the role of Bodhi. Swayze has played other roles in films where his character explores philosophy and enlightenment.